The longest C-C bonds are found in the carboranes by Clara Viñas et al!

Have you ever thought if the carbon-carbon (C-C) bond distance is always the same, or it can change? And if it changes, which is the maximum distance of this kind of bond? An article published in "Chemical & Engineering News!" addressed this topic. After this article was first published, Clara Viñas contacted C&EN to let them know that even longer carbon-carbon bonds exist than the ones they mentioned: In 2002, a team including Clara Viñas described a 2.022 Å long carbon-carbon bond in an inorganic cluster (Inorg. Chem. 2002, DOI: 10.1021/ic011285z).

To read the articles go to:

What is a carbon-carbon bond? You might think this is a question with a simple answer, but chemists are still working to figure it out. To do so, they are pushing carbon-carbon bonds to their very limits. Amid claims about who holds the record for longest bond, a more detailed story of bonding is emerging. 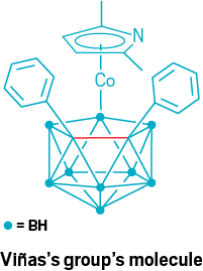 In 2002, a team including Clara Viñas of the Institute of Materials Science of Barcelona (ICMAB-CSIC) described a 2.022 Å long carbon-carbon bond in an inorganic cluster (Inorg. Chem. 2002, DOI: 10.1021/ic011285z). Like Xiao’s 1.931 Å bond, mentioned in our original story, this bond is found in a carborane cluster. Unlike Xiao’s bond, though, this one is part of a carborane within a larger organometallic compound. The compound features a negatively charged dicarbollide coordinated to a pyrrolyl anion via a cobalt(III) ion. As discussed in our story, the bonds in carborane clusters are more diffuse than a simple two-center, two-electron bond, and this holds true for Viñas’s bond as well. When asked to describe their bond, Viñas and group leader Francesc Teixidor describe how a combination of sterics and back electron donation to an antibonding orbital create a long carbon-carbon distance that has fewer electrons than a simple single bond between carbons. Viñas also mentions an even older paper, from 1987, in which Ken Wade, then at Durham University, and colleagues reported a carbon-carbon distance of around 2.001 Å in a carborane (J. Chem. Soc., Chem. Commun. 1987, DOI: 10.1039/c39870000889). This find in the literature shows that investigations pushing carbon-carbon bonds to their extremes have been going on for longer than our article indicated.